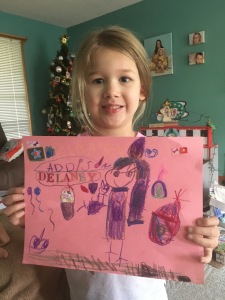 “Don’t make fun of me on Christmas morning,” five-year-old Delaney said to her dad. She climbed into his lap and buried her face deep into his shirt.

“Don’t make fun of me if I don’t have much presents on Christmas morning,” she explained. “I know I haven’t been that good this year.”

My husband and I tried to stifle our laughter. We didn’t want to further upset Delaney when she was genuinely worried about Santa not bringing her gifts. But to be completely honest, our daughter does have a few reasons for concern.

For starters, Delaney has a sassy mouth. She often offers a quick retort when she’s not fond of the question being asked. Just the other day, we were on our way home from a holiday event, and Delaney was eating her dinner in the backseat. She asked for a cookie, but we weren’t sure if she had eaten all her dinner.

“Have you finished your cheeseburger?” my husband asked her.

There was a long pause.

“Can Jesus see inside my Happy Meal box?” she asked.

Again, my husband and I tried to hold back laughter. Delaney had unknowingly given herself away.

“Finish your cheeseburger,” my husband said.

Delaney has a sweet tooth and a weakness for candy of just about every variety. She also has a history of sneaking pieces up to her room. She makes earnest attempts at hiding the wrappers, but they often turn up when we do laundry or check behind furniture.

About a month before Christmas, I bought some candy and stashed it away for her birthday goody bags. I didn’t think she was aware that the bags of lollipops, licorice, and fruit chews were even in the house.

When I moved some things around in the cabinet, I noticed the bag was slit and half empty. We questioned both children about the missing candy, and both of them promised they had not taken it. Then we told them we were going to check the (nonexistent) video footage from the dining room.

“But, Mom,” Delaney said, her face wrinkled with worry. “I don’t know if I’m lying or not!”

Once again, Delaney had given herself away. And once again, my husband and I were nearly choking on laughter.

Later that night, we had a serious conversation about sneaking candy, telling the truth, and behaving properly, regardless of who might be watching your Happy Meal box. She listened as attentively as a five-year-old can and said she would try to do better, especially since Christmas was coming and Santa was watching.

About two weeks before Christmas, we took the children to see Santa. Delaney, who is typically pretty bubbly, sat quietly on Santa’s lap until he spoke first. I could tell she was nervous. After the photographer took the picture and we overpaid for an image of our daughter grimacing instead of smiling, I asked her how it went.

“Pretty good,” she said. “Santa didn’t say anything about my behavior.”

In the days leading up to Christmas, Delaney busied herself with making and wrapping presents for each member of her family. She drew portraits, saved coveted pieces of candy, and wrapped them in paper decorated with stickers, glitter, and bows. She worked tirelessly to make sure she had something to give to everyone.

Later that evening, Delaney told me that Santa must have seen some of the good things she had done.

“I’m sure he did,” I agreed. I think he looks for the good things.”

“Well, I’m going to do even better next year,” she promised.

I think that Santa appreciates a child who can recognize and admit her own shortcomings and who has the desire to improve. I know her father and I do.