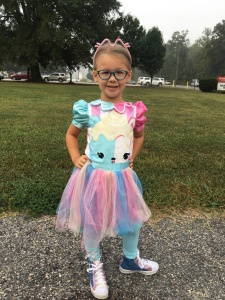 Dressing Delaney was simple last year because her school required a uniform. Each day she wore a plaid jumper over a white polo, with matching navy tights and black Mary Janes.

Life was easy then. There may have been no room for creativity, but there was also no room for arguments.

This year, Delaney is in public school, and she has a bit more freedom in her wardrobe. She has always had a strong sense of self, and more recently, that has transferred into her fashion choices. She knows what she likes, and what “looks bad.” And she is very much aware of the effects a fantastic outfit can have on her self-esteem.

“I look awesome in this!” she exclaimed the other day, while trying on a black leotard at Target. She has since worn the leotard around the house on the weekends, but thankfully, she hasn’t mentioned wearing it to school.

She has, however, asked to wear the shirt portion of a Wonder Woman costume, and she became incensed when I pointed out that it was tight and showed her belly.

We don’t always agree on what fits.

Another issue we don’t see eye to eye on is color coordination.

“That doesn’t match,” I told her, as she slid her legs into striped leggings and pushed her arms through a floral print top.

To minimize the morning clothing chaos, we pick out Delaney’s outfits for the week on Sunday afternoons. She tries each one on. She looks at herself in the mirror, then she does her splits. If the outfit passes both the fashion and flexibility tests, we hang it up in the closet, so it’s ready to go. We also pick out a few alternates because…she’s Delaney.

This week’s lineup includes leggings, a rainbow skirt, and two Halloween costumes. Before I agreed to costumes, I checked the school’s handbook and read the dress code line by line. The costumes don’t include a mask; they aren’t revealing, and they are longer than her knees. They really look more like dresses than actual costumes.

There is, however, a clause that prohibits clothing that is “disruptive to instruction.”

But isn’t that the very essence of being a kindergartner? Five-year-olds, by nature, are disruptive to instruction. What difference does an outfit make?

I’m letting her wear the costumes this week. If we’re told they aren’t appropriate, she won’t wear them to school again. I’m not encouraging her to break rules, but I do want to encourage her to express herself.

At five years old, there is very little that Delaney can control about the world around her. But if a few outfits can make her feel ready to take on this crazy world, she needs to wear them. I want her to feel as awesome as she did in that black leotard, every day of her life.